Meet the HBA London Board

Welcome to HBA London, the largest HBA chapter in Europe with over 360 members. Having started with just 10 volunteers to run the chapter in 2017 we have now grown to a team of 34, led by a remarkable board, who brings our volunteers together around our vision and goals. We are working together to create a UK healthcare sector where everyone, regardless of gender, feels included, has equal opportunities and is equally represented at all levels of the organisation.

Meet the HBA London Board

Andreea Apostol
president
Andreea joined Pfizer in 2011 in Romania, moving to the UK in 2016 and holding roles at a country, regional European and global level. She has worked across many functions including corporate affairs and marketing, medical information, regulatory strategy, packaging development, medical quality and compliance, business operations and general management, company acquisitions and alliances.

She initially began volunteering in 2015 while marketing for a US non-profit organization promoting a toxin-free product for babies. She then went on to support a non-profit in Haiti focused on teen education, before moving on in 2016 to focus on women in leadership activities supporting the HBA.

Andreea was actively involved in co-chairing the HBA global engagement efforts, building the European women talent development strategy and synergies between HBA and UK women’s networks. In the US she helped with senior leadership development and coaching programs, in the Europe region she helped with leading the marketing campaign for the European leadership summit, volunteering engagement and in the UK she started as a committee member, then transitioned to a VP role followed by leading the chapter as president in 2018.

Ashley Cox
VP
Ashley moved from commercial roles in Pharma to consulting around 10 years ago and is head of business development (Europe) at SmartAnalyst, Inc, a global strategic consultancy which supports development of disease, asset and portfolio strategies across the earlier stages of clinical development.

Ashley has been VP of HBA London since late 2019, but her HBA journey started after she attended the HBA Woman of the Year event in 2018. Inspired to get more involved by the incredible stories of overcoming challenges and driving change, Ashley started volunteering across several different events and activities, before successfully applying for the VP role. As VP, Ashley and her team are responsible for raising awareness of the many benefits the HBA can bring to our UK-based Corporate Partners and helping to support their gender parity, diversity and inclusion initiatives.

Since joining, Ashley has benefitted enormously from both a professional and personal perspective and is constantly learning, developing new relationships and is re-energised by working directly with an amazing board of leaders, volunteers and members to be a united force for change across the healthcare sector.

Sara Radenovic
director of programming
Sara is a pharmacist and a clinical development professional with experience in academia, biotech and the pharma industry. After completing her doctorate on inflammation in heart failure patients, she had a chance to work in different stages of drug development: from early phases to compassionate use programs. Sara currently works as an expanded access manager for GSK’s oncology assets.

She is passionate about empowering women in the workplace. Apart from volunteering with HBA London, she also co-leads the Women’s Leadership Initiative at GSK’s Stevenage site. When she is not busy working, advocating for women’s rights, dancing or bird watching, she writes. You can find some of her articles at medium.com/@saradenovic.

Manchandan Kaur Sandhu
outgoing director of marketing communications
Manchandan, known by friends and colleagues as Chan, joined the HBA UK community in 2018 just before she was due on maternity leave for the first time. On returning from leave, her first venture out into a professional environment was an HBA event in early 2019 and the warm welcome and engaging conversation had her hooked. Chan has been volunteering with the HBA ever since, starting as a team member for the marketing communications team.

She has been leading the HBA London marketing communications team since February 2020 and has had the pleasure of collaborating with many inspiring colleagues on several projects, including the HBA London Gender Parity Mini-Series. Since being an HBA member Chan’s career has gone through several exciting changes and the support from the HBA has been instrumental in championing these developments. Most recently, Chan had the opportunity to talk about her career path at an HBA event where we learnt about her current sales leadership role at RWS Life Sciences and how programs such as the HBA Mentoring program have helped her along this path. Chan is transitioning out of her role and handing it over to Jodi-Ann as she prepares to move into a more senior role at RWS.

Jodi-Ann Hicks
incoming director of marketing communications
Jodi-Ann Hicks is an external operations manager for Ortho Clinical Diagnostics. Jodi-Ann comes from the healthcare space where for the last 10 years she has specialised in operations, supply chain and strategic sourcing roles. Jodi-Ann has a huge passion in continuous improvement and operational excellence and will often say that what really drives her on a day-to-day basis is just making things better. Previously as the youngest team member (and only female) to step into an operations manager role she has shown dedication to be fierce about fairness and carve the path for others to follow. Jodi-Ann has spent a lot of time over the last few years volunteering for local groups in South Wales where she lives, particularly ‘Chwarae Teg’ where she was a finalist in the 2019 Womenspire awards for ‘Learner of the Year’. What really gets her up in the morning and so driven about supporting the HBA is her passion for help everyone gain the skills and knowledge to be their best self. 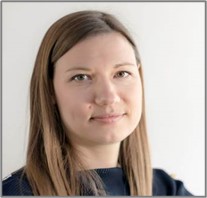 Helena Andersson
director of volunteering engagement and membership
Helena is a global scientific communication lead at Sanofi. Prior to joining the pharmaceutical industry, Helena worked in both contract research organisations and academia. She has over 10 years of experience within life sciences ranging from basic medical research, clinical development, real-world evidence generation, data dissemination and scientific communication. Helena is dependable, committed, always helpful and results-oriented.

She joined HBA London as a member after attending the Woman of the Year event in 2018 and has been volunteering for over two years. Helena has had an incredible journey in the HBA as a valuable member of HBA London in the marketing communications team, as well as in the regional team supporting the European Leadership Summit.

Shreya Patel
director of business operations
Shreya is a franchise lead within the vaccines business unit at Sanofi. She was previously an NHS doctor specialising in obstetrics and gynecology, with an interest in family planning and access to contraception for women, to enable participation in social and economic aspects of life. However, she became frustrated at widening health inequity and failed prevention, which led her to pursue a master’s in public health to gain a greater understanding of the cause of such issues. She became particularly interested in the role the pharmaceutical industry plays in the functioning of health systems and the supply of medicines and technology to both the developed and developing world.

Shreya joined the HBA London board as she actively wants to help women succeed and reach their potential in the workplace, specifically in the business of healthcare. She has seen first-hand the immense impact women can have on businesses and believes that power needs to be harnessed. Ultimately, she wants to support and give back to the HBA community, which was a pillar of support during her career transition.