Gender Parity Initiatives for the Office and Society: Are Companies and Governments Doing Enough?

Hello and welcome to our fifth article of our gender parity mini-series. In the first two articles, we reviewed work-life balance, in articles three and four we concentrated on behaviour and experiences in the workplace whilst in the last two articles, we will focus on gender parity initiatives in the workplace and ultimately in society. Despite the gender gap being smaller now than 50 years ago, is there anything else we can do to improve the situation? Are companies and governments taking action and if so, what have they achieved so far?

The need for gender equality in the workplace has been recognised as a critical issue for decades. However, women still remain vastly underrepresented within many workplaces. This is particularly evident at the c-suite level, with women occupying just 14 percent of senior executive positions in the 600 largest companies in Europe. A lack of support during pregnancy and the challenge of balancing childcare with work account for many women’s decisions to leave paid employment. Some women experience difficulties in returning to work after a career break; others return to work but find fewer opportunities for promotion and progression than their male counterparts. These are topics that Helena Morrissey touches upon in her book ’A Good Time to be a Girl’ but this is not the first time we encounter such issues. Despite gains for women in leadership, the “glass ceiling” was still a major barrier in 2019. For the sixth year in a row, women continued to lose ground at the first step up to manager, for every 100 men promoted to manager, only 85 women were promoted.

A European study showed that, in the EU, women earn on average 14.1 percent less than men per hour (figure 1). Additionally, only 67 percent of women in the EU are employed, compared to 78 percent of men and, as brushed upon in article 1, the majority of unpaid care and domestic work is done by women. The European Union is working together with its members to make sure the gender gap is reduced and to ensure that women and men receive equal pay for the same work and for work of equal value. To do this, they have decided to submit binding measures on pay transparency by the end of 2020, making EU rules on work-life balance for women and men work in practice. This would ensure that Member States transpose and implement the rules and by promoting equal uptake of family leaves and flexible working arrangements improving access to high quality and affordable childcare and other care services by investing in care services. 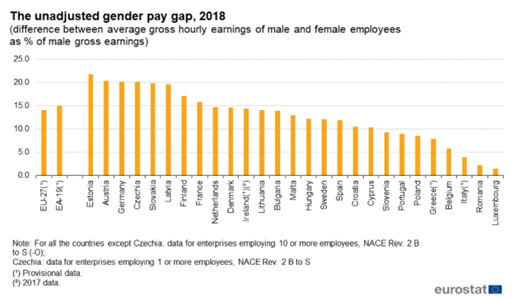 There are also examples of a gender pay gap within our community. Although Emma Walmsley, the CEO of GSK, received a slightly higher salary than Vas Narasimhan, the CEO of Novartis, Walmsley’s salary was relatively low compared to that of other biopharma leaders. Additionally, her starting base salary was still lower than what her predecessor Andrew Witty received the year before she became CEO. The gender pay gap and disproportionate ratios of men and female executive positions are two of the most common issues in the biopharma world.

The #metoo movement has been instrumental in promoting gender equality recently, as it received an endorsement from more than 100 female leaders who are “frustrated to still read stories about women not getting the pay they deserve.” At the beginning of 2020, prior to COVID, the representation of women in corporate America (a McKinsey study), but similarly in other European countries, was moving in the right direction. Within senior management, between 2015 and 2020, the percentage of women in senior VP roles grew from 23 percent to 28 percent and in the c-suite, the percentage of females grew from 17 percent to 21 percent. In fact, gender equality issues were becoming more prominent in international debates and an engagement for gender equality on the political scene was also noticeable. Thus, equality between women and men stood a chance of receiving more attention and consideration in the coming years. However, due to the challenges created by the COVID-19 crisis, as many as two million women are considering leaving the workforce, putting a dent in the significant progress made for gender parity.

Nonetheless, companies and organisations are working endlessly to improve gender equality within their organisations. In 2018, industry trade group BIO renewed its workforce diversity goal, raising the 2025 target for female representation at the functional leader and c-suite level to 50 percent and aims to have women on 30 percent of the industry’s boards by 2025. The British government has set a target of 33 percent women in leadership roles at FTSE 350 companies by 2020, but with us now being in 2021, has this been achieved? A “Women Count 2019” report, found that only 3.7 percent of those companies have female CEOs and more than 85 percent of companies have no women execs on their main boards. Unlike other industries, Pharma seems to have better numbers, with women filling 26 percent of the executive committee roles, which almost triples 2018's 9 percent. What can companies do to improve this?

A number of companies, such as Nestle, Vodafone and Novartis, have launched gender balance plans. Nestle, for example, aims to increase the proportion of women in the group’s top 200 senior executives from 20 percent to 30 percent by 2022. In 2019, they also launched the Nestle Global Parental Support Policy, where they recognized the diverse structures of modern families. The new policy sets global minimums, providing gender-neutral parental support for all employees by the end of 2022. Under the policy, the minimum period of parental leave for primary caregivers is extended to 18 weeks and there is now a minimum of four weeks’ leave for secondary caregivers. The new policy also reinforces employment protection, non-discrimination, health protection, the availability of flexible working options and breastfeeding support.

It is evident that women are paid less than men at work and do more of the house chores at home. It turns out that this pattern starts from earlier on, as early as childhood. Although there are a few signs that the gap is shrinking, a variety of data shows that girls still spend more time on household duties than boys do. They are also paid less than boys for doing chores and have smaller allowances. Shouldering more responsibilities at home is a big reason why women are paid less than men and fall behind men in their careers, researchers say. Achieving equality, they argue, will require not just preparing girls for paid work, but also teaching boys to do unpaid work.

Nevertheless, there are signs that the gender gap in chores is beginning to narrow, as it is for adults. In one area, in particular, caring for family members, like siblings or older relatives, boys are doing as much as girls. Researchers say this could influence future generations, with boys who are raised caring for family members being prepared to become more engaged fathers and this aligns with sentiments expressed by younger HBA members. However, there is still much to do and so we ask ourselves how can we stop this negative pattern?
One way is by challenging gender stereotyping, in October 2018, London’s City Hall announced the ‘Gender Action School Awards Programme’. The programme aims to transform school environments through promoting whole-school approaches to challenging gender stereotypes, thus hoping to reduce the constraints these can have in the future lives of girls and boys. Gender Action is based on the premise that there are no inherent differences between the genders that should limit anyone’s interests, capabilities and ambitions. Schools can encourage young people to be individuals and can be places where choices are free; not edited through a gender filter.

It is not unheard of that gender parity in the boardroom improves the social performance of organisations, using metrics such as corporate social responsibility and corporate reputation and therefore, it is not something only companies should be willing to push but countries should do too. This is common in the Nordic countries, who lead the world at closing the gender gap. Nordic countries all benefit from a developed welfare state and foster forward-thinking initiatives, which support women joining, or returning to, the workplace. For example, in Iceland, progressive childcare policies mean that women aren’t faced with a choice between work or raising children. Universal childcare and generous parental leave policies (women and men both get 90 days leave) help to remove the burden of childrearing from mothers.
Norway has closed more than 83 percent of the overall gender gap and continues to make progress. Supportive parenting policies and heavily subsidized childcare provision have led to a high percentage of women entering the workforce. Since 2013, mothers and fathers have been obliged to take at least 14 weeks of employment leave following the birth of a child. Because of this, Norway enjoys a near-even distribution of male and female workers, with many women in positions of power. Gender quotas legislate for a 40 percent female presence in the country’s parliament and on business boards, resulting in a strong female presence. The prime minister, minister of finance and minister of foreign affairs are all females.

Sweden and Denmark follow suit. Anneli Häyren, a researcher at the Centre for Gender Research at Uppsala University in Sweden, argues that Scandinavian countries believe that they are extremely close to achieving gender equality however, there is a long way to go before this is achieved, probably another 50 years at least. Still, we can’t deny their government, society and companies have and are really working hard to get there.

There have been various solutions campaigners have been proposing to promote equality including calls for individual company targets for senior managers or nationwide quotas which will force companies to take the matter seriously and not see it as a hobby. Danish start-up community manager Bolette Wrestroem expresses that whilst quotas are potentially a “good stepping-stone” this could also suggest that women are only there because it is required and not because of their skills or capabilities. Dani Nguyen, a recruiter based in Sweden, believes that ultimately the main issue that needs resolving is, companies need to create an environment where people of different backgrounds, ethnicity, gender, religion, sexuality, feel empowered and supported to do their best. As a recruiter, she has placed several women in high positions however, a number of them ended up leaving because they felt they needed to adapt too much to be heard.

Join us in our last article where we will highlight what some of our HBA members think companies and society are doing and can do to improve gender equality for our generation and the next ones to come.